Something was always going to give.

The space-time continuum splintered when it was announced, seemingly a decade ago, that Shane Black would helm the next installment of the unquenchable “Predator” franchise.

On one hand, you have a nostalgia-fueled auteur responsible for two of the smarter comedy-mysteries of the 2000s. On the other, he’s taking on a sci-fi property in freefall correlating with an insistence to stay bound by shackles of self-seriousness.

It was certainly one of the more unexpected Hollywood unions in recent memory, but Black deserved some benefit of the doubt. After all, he tagged along with Schwarzenegger and Co. in the 1987 original (and still best?) “Predator” film. If there’s someone who could infuse one of cinema’s most iconic extraterrestrials who probably shouldn’t have endured past the ’90s with much-needed retro sensibilities, Black might be the guy.

Something had to give.

Unfortunately, it gave the wrong way—in a violent, confusing 100-minute cascade of a film that has the pretentiousness to think it’s achieved something, whether that something is empathy or awe. It says a lot about the franchise’s current standing that those are goals for Black’s movie, and perhaps says even more that they’re overwhelmingly not fulfilled.

It’s a little difficult to figure out where to start with the issues that glare through “The Predator,” in part because they mirror the problems that plague most other testosterone-fueled cinematic concoctions.

Perhaps most frustrating is that between family drama, gory R-rated spectacle or sci-fi thriller, “The Predator” doesn’t know what kind of movie it wants to be. And it’s not really admirable to say it attempts to excel at any of those things because, plainly – unless you’re a moviegoer made giddy at the kind of cinema that excels in limb-slicing and blood-gushing – it doesn’t make a memorable impact on any of those three fronts.

Black is known for provocative humor in his movies; anyone who has watched “The Nice Guys” or “Kiss Kiss Bang Bang” is well aware of it. And while his brand of off-the-cuff profane comedy dots the otherwise bland landscape that is “The Predator’s” screenplay, it comes off as almost ad hominem here instead of the thoughtful witticism that Black’s reputation embodies.

Women – namely Olivia Munn, because I can’t remember another female character of consequence in this male-dominated mess – are treated as more alien than the alien hunters themselves. Characters with mental illness are relegated to little more than punchlines, and it’s tough for the typically reliable combination of blood and guts to be comically exaggerated in a world where “Kick-Ass,” “Game of Thrones” and Zach Snyder exist.

As for the capital-A “Action,” “The Predator” is packed with seen-that, been-there style set pieces. The fight in the woods. A breakout of a military base. A standoff on an alien vessel.

The story that serves as the connective tissue to those bits of the movie is enough of an elevator pitch to suffice as “plot”: a cardboard-cutout soldier in custody teams up with a group of equally one-note Dudes With Muscles And Guns to save his son who has, for reasons that won’t be delved into here, been targeted by the hunters.

It’s a movie trapped by its own insecurities, preventing it from aspiring to be something more than it is; worse, it mistakes more for meaning more sequels, more brain cell loss, more of the absolute same.

In the spirit of transparency, some frankness: No one is going to a “Predator” movie for engaging storytelling. Every minute a dreadlocked alien hunter isn’t onscreen tearing its prey limb-from-limb feels pointless, like going to a sporting match to watch the referees converse.

Still, when a franchise defined for liberal violence and appealing to our basic cinematic desires includes its characters playing fetch with space dogs, it’s hard not to wonder exactly what it is we’re doing with our time.

Black’s dirty half-dozen is an amalgam of every morally questionable, testosterone-fueled protagonist we’ve seen before, an archetype that the writer-director leans into so heavily here (i.e. cigarettes being extinguished on tongues), but his attempts to make us feel something for them are done away when we cheer at them being delivered a visceral death. Isn’t that why we’re here anyway?

Much in the same way this movie feels like little more than a checking off of boxes for a genre cashgrab, this review has felt a bit like a Mad Libs to write. And it shouldn’t be assumed that “The Predator” is going to be universally shrugged off—it very much appeals to a specific type of moviegoer that will find everything they could ever want in a movie with “The Predator.” 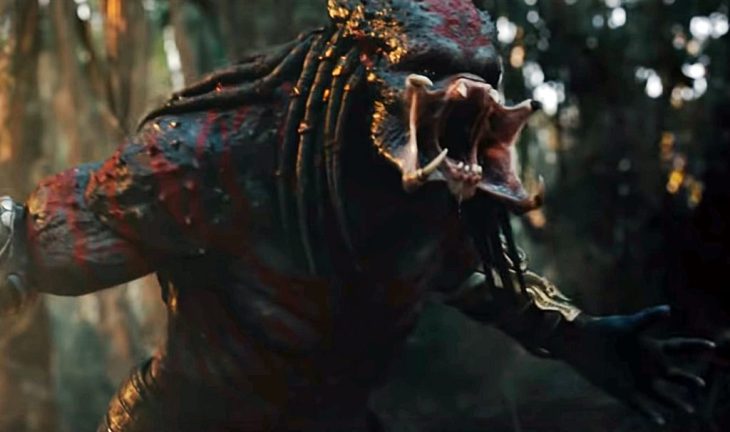 But maybe it should begin to be asked why we keep returning to this caliber of movie. And why hire someone of pizzazz like Shane Black for the job when any director could have yielded a very similar product, specifically for the fact that it’s been done so many times before?

While cinema has been a shrine of innovation, it’s frustrating when at other times it shows a propensity to stay very much in the same place. You’ve seen this movie, already; you’ve seen it a dozen times. Why should Hollywood expect that we’ll pay a month’s subscription of Netflix for a ticket when we can have this entire genre on our TV sets and, worse, why do we continue to prove that assumption true?

But that’s not a conversation for a critic to start; I’ll leave it to the film economists and philosophers. I do hope, though, that it provides some context for a nagging feeling I’ve felt in writing this review that I’ve already written many times before.

I’ll end by returning to what has/should have differentiated “The Predator” from others of its ilk. Black, through a very limited discography, has crafted some modern classics, combining nostalgia with contemporary humor to freshen up would-be recycled stories. He’s even succeeded with bigger productions before, via “Iron Man 3.”

But here, it seems as though he’s just using his minor history with the “Predator” franchise as an excuse to bring to life a gory, nonsensical wet dream he’s had in the decades since, stalling the momentum of an otherwise understatedly fascinating career.

Appreciating the “Predator” series feels like a throwback of a sensibility itself, but this iteration feels outdated in the worst ways. Surely over 30 years later we can come up with a fresher take of “The Most Dangerous Game”?