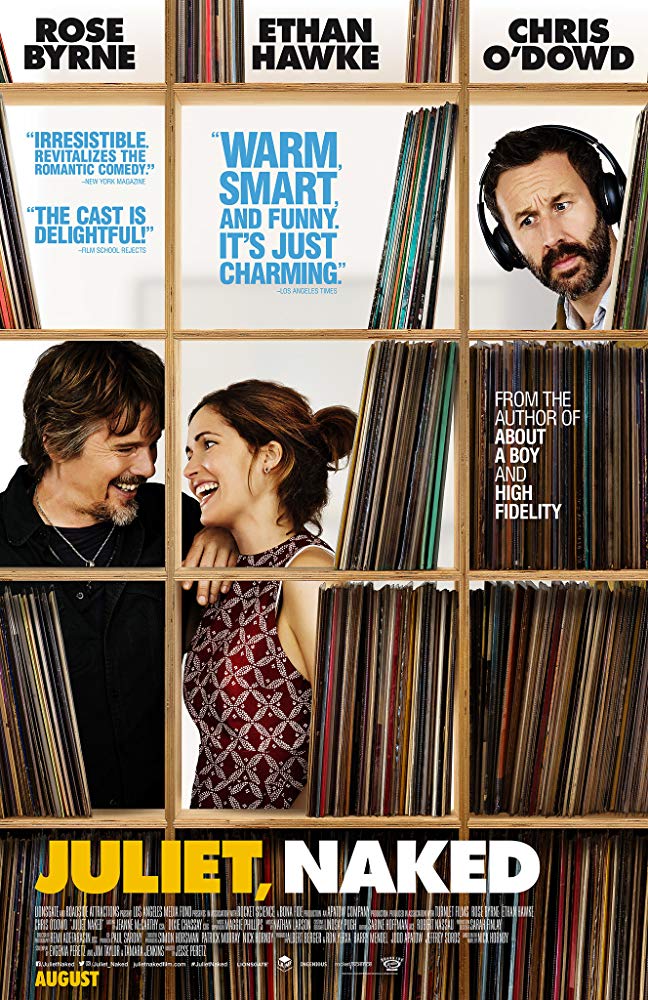 We all have idols. Human monuments – whether in the public’s consciousness or merely our own individual headspaces – who we venerate in blogs or by internal means.

But in those obsessions, do we ever stop to monitor ourselves, and consider how we believe they influence the world don’t mirror how they perceive themselves? Have we ever thought about what we’d say if we ever met them, or worse, if they alleged our perceptions are off-target?

That’s one of a few simultaneously interpersonal and intrapersonal conflicts explored in Jesse Peretz’s “Juliet, Naked.” It’s also arguably its most interesting, interweaving adoration and comically exaggerated (or perhaps not?) reverence, though the one Peretz spends the least amount of time deconstructing.

Still, that doesn’t stop the director from offering a charming breeze of a romantic-comedy, one buoyed by its three delightfully eccentric leads who find themselves in the same stages of middle-aged life with varying degrees of accepting the fact.

In small-town England, we meet Annie and Duncan (Rose Byrne and Chris O’Dowd, respectively) a couple stuck in a quagmire of a relationship 15 years in. That’s thanks in no small part to Duncan’s real partner being his ever-growing obsession with Ethan Hawke’s Tucker Crowe, an American has-been musician who Duncan studies with as much ferocity as he can muster.

In a reality that confounds him, Duncan finds himself compensating for the lack of love the rest of the world seems to share, worshipping a rock star that’s more on par with a forgettable one-hit wonder than Tom Petty.

Annie, suffice to say, is increasingly put off by Duncan’s teenage-like infatuation, to the point of developing her own annoyance-fueled opinions of Tucker Crowe (in this world, only mentioning the man by his full name will do). If anything, her frustration is understated; Duncan will be quicker to jump on his blog to review new versions of decades-old Tucker Crowe songs before sharing that intimacy with Annie while they watch movies from couches on opposite sides of the room.

But at this point in her life, she finds it easier to endure than to begin again.

Soon, though, in a serendipitous connection, Annie and Tucker Crowe start corresponding via email from across the Atlantic. Their pen-pal’ing is one fewer standard deviation from being an affair when the washed-up Tucker flies to England and meets Annie, at the same time greeting the arrival of his grandson. 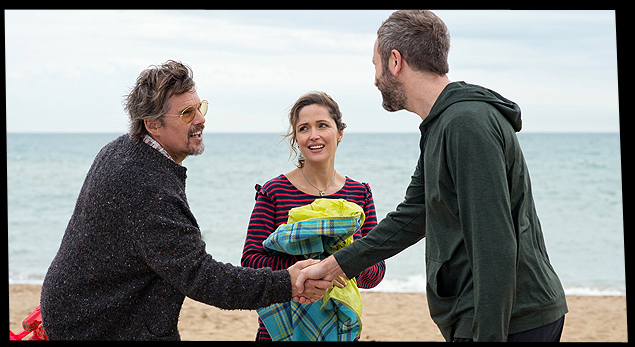 At the same time, Duncan begins to move on from his relationship with Annie in his own ways, and, before long, a love triangle of a new caliber emerges – one of a much more whimsical kind, with incredulity at its core where infatuation would normally reside.

The ensuring tug-of-war is an endearing one, one made more complex by the factor of fame and unexpected sparks.

For all the archetypes the rom-com genre is perpetually in danger of falling into, “Juliet, Naked” stands out by being remarkably fleet-footed, perhaps a bit too much so. The film’s team of writers (three of them, according to IMDB) execute their updating of the love triangle dilemma to hilarious and more-or-less believable ends, using its strong cast as the ticket to an appropriately enjoyable 90 minutes in the theater.

Byrne is easily sympathetic as Annie, bouncing between romantic hopelessness and profane exasperation on a level that’s fewer notches below her turn in the “Neighbors” films as you might expect. 2018 continues to be a stellar year for Hawke, the graciously gruff Tucker attempting to work on the things that matter the most in life.

O’Dowd might be the standout of the bunch, embracing his outlandishness as a foil to his idol’s comparatively collected knowledge of where he is in life. O’Dowd’s is a performance not as nuanced as his costars, and certainly Duncan is easier to condemn, but it’s hard to look past the roots of his vulnerability.

The script works to each actors’ strengths, to be sure. As the story unfolds and becomes an at-times unflinching reminiscing over missed opportunities and pessimistic outlooks, it remains hopeful in its prognosis, while Byrne, Hawke and O’Dowd stay the course for their respective characters and their problems. That being said, “Juliet, Naked” speeds toward a bit of an untidy finish, and another 15 minutes or so would have been welcomed so as to see where our trio ultimately ends up, despite there admittedly being enough clues for us to form our own conclusions. 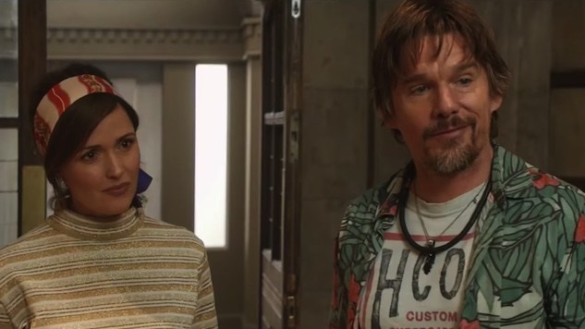 Perhaps the screenplay’s greatest victory is in using the fantastical notion of meeting an aging musician as an avenue to much more universal themes, including parentage and making up for lost time and lost relationships. It’s never too late to begin again, “Juliet, Naked” teaches us, and not just when it comes to our dreams.

Peretz’s direction ensures that the film’s beating heart is uncovered with the appropriate mixture of tenderness and amusement. At the same time, he makes an admirable, though unvarnished, attempt at connecting the understated majesty of unfinished songs to relationships lacking in their legitimacy. What are demos to chart-topping tunes rooted in heartbreak if not an attempt to reconcile with our pasts, to construct fulfillment from despair?

Perhaps “Juliet, Naked’s” real message – coated in all its zaniness – is that our autobiographical melodies sound most beautiful when they’re formed from rubble.